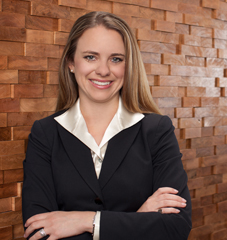 Catherine Singer focuses her practice on complex business and commercial litigation and is committed to her clients and obtaining the best results for her clients. She has worked on a wide range of matters in state and federal courts, representing both plaintiffs and defendants. Ms. Singer has been able to obtain favorable judgments for her clients at all stages of litigation, including having claims dismissed at the motion to dismiss stage, defeating class certification, obtaining summary judgment, and prevailing at trial and in arbitration. Ms. Singer also has significant e-discovery experience.

Represented Defendants/Counterclaim-Plaintiffs in successfully obtaining a $6.1 million jury verdict for breach of fiduciary duty and civil conspiracy, including $5.5 million in punitive damages, following a thirteen-day jury trial in Jackson County, Missouri.  The plaintiffs initially filed claims against clients on various theories, all of which were dismissed by the Court prior to trial.  At trial, persuaded the jury that Counterclaim-Defendants improperly used their control over Counterclaim-Plaintiffs to take monies for lavish personal entertainment and other self-dealing transactions, and that the award of punitive damages was appropriate to deter future conduct.  Raizada Group, LP et. al. v. PHC Holding Company, LLC, et. al., No. 1416-CV14245 (Jackson County, Missouri, November 1, 2017).

Represented Fortune 500 company in a shareholder suit in which the acquired company’s board was alleged to have breached its fiduciary duties to shareholders. Following class certification, firm successfully won summary judgment dismissing the case in its entirety in California state court. (Santa Clara County, California).

Represented financial services company in a worldwide antitrust investigation and assisted with the related internal investigation.

Assisted Fortune 500 company in developing its e-discovery guidelines for outside counsel.

Missouri Lawyer’s Weekly Up and Coming (2018)

United States District Court for the Central District of California