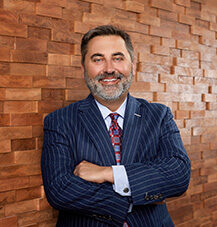 David is an experienced trial attorney who has successfully litigated and tried cases in a number of specialized areas, and on behalf of both plaintiffs and defendants. Clients, peers, and judges have characterized David as being a “passionate advocate” and “one of the finest trial attorneys in the Midwest” who fights for his clients “zealously but with class, courtesy, and, probably most important of all—a great sense of humor.” David’s knowledge and experience representing both sides of the litigation equation have generated extraordinary results, including nationally recognized, record-setting verdicts and awards.

In recent years, Missouri Lawyer’s Weekly recognized David with the unique honor of having obtained unprecedented successes from both defense and plaintiff perspectives. In 2020, he was credited with the highest-rated defense result of the year (obtaining complete dismissal of indemnification claims of over $75 million). In 2019, he was credited with one of the highest plaintiff settlements of the year (securing a $10.1 million settlement). He also held that honor in prior years for obtaining a $60 million jury verdict in a commercial fraud case and a defense verdict in a highly publicized gas explosion case. His work on high-profile cases has generated both local and national media interest, including televised trial segments and an appearance on MSNBC’s series American Greed. David’s experience and contacts in this area can prove invaluable when confronting disputes in both the courtroom and the media.

Before transitioning into his boutique trial practice, David spent 18 years as a commercial litigator and partner at one of the Midwest’s largest defense firms litigating cases in a wide array of contexts, including antitrust, healthcare, securities litigation, Telephone Consumer Protection Act/media law, and product liability. He has represented a broad spectrum of clients, ranging from individuals and small start-up companies to Fortune 500 companies, and including health care systems, international medical device manufacturers, national banks, and an international tire manufacturer. These varied representations have provided him with extensive experience in complex litigation matters such as national class actions and multi-district litigation.

In addition to appearing in trial and appellate courts across the United States, the St. Louis Metropolitan Police Department retained David as Special Counsel to the Internal Affairs Division to oversee investigations and prosecute scores of cases.

David authors articles and presents at seminars to industry and in-house counsel associations across the country. He served as a faculty member for the National Business Institute and the American Conference Institute. The Missouri Bar Association also retained him to co-author chapters for the Missouri Bar CLE publications on tort law and damages. In addition, the United States Court of Appeals for the Eighth Circuit invited David to present at the Eighth Circuit Judicial Conference. His peers selected him for inclusion in Missouri & Kansas Super Lawyers since 2014, Rising Stars® 2010-2013, and St. Louis Business Journal named him among their “30 Under 30” Class of 2002.

Based upon his experience and track record, companies and individuals have entrusted David to represent them in high-stakes, sometimes billion-dollar, litigation in both the plaintiff and defendant contexts, including commercial, personal injury, fraud, and mass catastrophe cases. As some representative examples, David has:

Obtained a record-setting $60 million jury verdict on behalf of a non-profit health clinic based upon a leasing fraud conspiracy which included a wholly-owned subsidiary of a national bank,

Obtained a complete defense verdict in a highly publicized case stemming from a gas explosion which killed one, injured many others, and destroyed a popular restaurant in Kansas City, Missouri

Defended an international corporation in a billion-dollar TCPA class action,

Obtained a seven-figure award for a former NFL player in a securities fraud case,

Obtained complete dismissal of a securities class action against a Fortune 500 publicly-traded company,

Negotiated one of the largest individual auction rate security settlements in the nation,

Defended and settled a group of antitrust opt-out class actions against a national managed care organization for far less than the original class settlement, and

U.S. Courts of Appeals for Seventh, Eighth and Ninth Circuits

Marygrove
Board member, Treasurer and Member of Executive and Finance Committees

Friends of the SLU Liver Center – Board Member