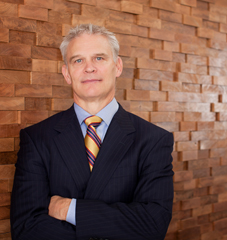 Described in Chambers, a referral guide to leading lawyers in the United States, as wielding an “aggressive, successful courtroom style,” employing “aggressive yet well measured tactics,” and being “tenacious” with “a good- humored attitude.” He has a broad based litigation and appeal practice that cuts across a variety of substantive areas, reflecting his expertise as a “trial lawyer” and “appellate practitioner.” He represents corporations and individuals both as plaintiffs and defendants in federal and state courts and arbitrations throughout the United States.

Secured $452 million jury verdict for plaintiff utility on product liability claims arising out of power plant explosion. After trial court took away verdict, the verdict was reinstated on appeal.

After six-week jury trial, obtained jury verdict in favor of Nigerian battery manufacturer for approximately $1 million in a fraud based case. Case settled post-trial for double the jury verdict.

Obtained jury verdict in Iowa state court against nationwide retailer and in favor of individual plaintiff.

United States Court of Appeals for the Tenth Circuit

United States Court of Appeals for the Federal Circuit