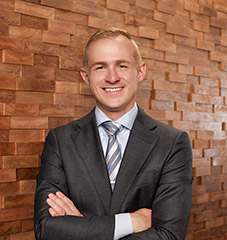 Ben Mooneyham specializes in complex civil litigation, with experience in intellectual property, commercial and contract disputes, tort defense, class action defense, and white-collar criminal defense. Ben graduated in 2012 from The University of Chicago Law School, where he was a member of the editorial board on The University of Chicago Law Review. After law school, Ben served as a staff law clerk at the United States Court of Appeals for the Seventh Circuit in Chicago, where he worked closely with each Seventh Circuit judge on civil and criminal appeals and appellate motions. As a practicing attorney, Ben has worked on matters in courts across the country.

Named as a Top Lawyer by Marquis Who’s Who: https://marquistoplawyers.com/2020/10/05/benjamin-mooneyham/

Represented Defendants/Counterclaim-Plaintiffs in obtaining a $6.1 million jury verdict for breach of fiduciary duty and civil conspiracy, including $5.5 million in punitive damages, following a thirteen-day jury trial in Jackson County, Missouri. Successfully obtained dismissal of all of plaintiffs’ claims prior to trial, proceeding at trial only on clients’ counterclaims. At trial, helped persuade the jury that Counterclaim-Defendants improperly used their control over Counterclaim-Plaintiffs to take monies for lavish personal entertainment and other self-dealing transactions, and that the award of punitive damages was appropriate to deter future conduct. Raizada Group, LP et al. v. PHC Holding Company, LLC, et al., No. 1416-CV14245 (Jackson County, Missouri, November 1, 2017).

A Gap in Kim’s Eliminative Argument for Reductionism, Episteme, Vol.XX (May 2009).

United States Court of Appeals for the Seventh Circuit